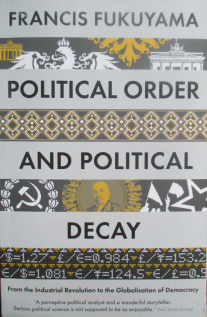 Francis Fukuyama’s second tome in his massive history of the state charts the process of state-building from around 1800 to the present, looking at a range of countries from the US and Europe through Latin America, Africa and East Asia. The book argues controversially that the main challenge facing many developing countries today is not lack of democracy but lack of a competent, effective state. The process of state-building is of course deeply political – but is there also a role for economic development programmes in supporting political reform?

It’s a familiar story. A new President is swept into office on a wave of popular feeling. He’s known as a brawler, a fighter, and his election campaign has pitched him as a man of the people – up against the old elites who have dominated politics for so long. He announces he is going to purge his Government of the corruption of the previous regime. He then proceeds to sack a huge range of officials, and goes on to stuff the bureaucracy with his own political supporters. In fact he massively increases the number of jobs which are subject to political patronage, seriously weakening the bureaucracy in the process.

Kenya or Bangladesh in the last 20 years? No, this is the United States in the 1820s, under President Andrew Jackson. The US looms large in the second volume of Fukuyama’s massive history of the state, both as a positive and a negative example to today’s developing countries, and it is one of the book’s attractions that the US’s challenges are painted as boldly as its strengths. Political Order and Political Decay picks up the story of state formation in the late 18th century, where the previous volume left off. Fukuyama argues that the context for political development after the Industrial Revolution is fundamentally different to that before, due to the possibility of sustained economic growth, the massive social upheavals associated with this growth, and the wide spread of institutional models through better communications, transport and outright conquest. Whereas the Ottoman Empire and Ming China could develop their own political institutions without much reference to each other, today a small number of institutional models are replicated, with some modifications, in almost every country in the world.

The book is divided into four sections. The first follows state-building in Western countries from roughly 1800 to the present. Fukuyama argues that the countries which put in place a strong, centralised bureaucracy before opening up fully to democracy, such as Prussia and Britain, were at an advantage in terms of state effectiveness compared to those countries which democratised first, such as Greece, Italy and the US. Democratic pressures drove corruption in these three countries, as political parties competed to buy off voters with the promise of government jobs. These chapters provide interesting parallels with today’s developing countries – for example in the way Greece’s government was seen as illegitimate because it was propped up by foreign powers, or how Southern Italy went through a kind of ‘modernisation without development’ where society urbanised without industrialising (hence preventing the emergence of an industrial middle class). The sections on the US also provide an interesting account of how a corrupt, patronage driven government managed to reform itself in the late nineteenth and early twentieth centuries, although in this case the newly empowered business classes – the ones that didn’t emerge in southern Italy or Greece – were critical to the reform process.

The second section of the book, titled ‘Foreign Institutions’, provides an overview of political development since 1800 in Latin America, Sub-Saharan Africa and East Asia. Fukuyama’s central argument is that developing countries’ success or failure in the modern world is not mainly related to whether they are democratic but to whether they have an effective, ‘modern’ state. This in turn is related to the institutions their histories have given them. In Latin America, colonial institutions and institutionalised racism helped a relatively small white elite maintain power from the time of independence (he argues the wars of independence were essentially about elites fighting to prevent the spread of liberalism from Spain to its colonial possessions, following the Spanish liberal constitution of 1812). In Sub-Saharan Africa, the main problem was not the colonisers’ bad institutions so much as their failure to invest much at all. Colonial rule managed to “undercut existing social structures […] while failing to implant much by way of modern state institutions.” In East Asia, by contrast, long traditions of effective indigenous bureaucracy and “rule-based decision making” put countries such as Japan and China in a good position to navigate the modern economy.

A third, shorter section reviews the march towards democracy over the past 200 years, with Fukuyama’s main point being that it took a long time for European countries to develop effective democratic institutions. An insightful chapter compares the abortive 1848 rising in Europe with the Arab Spring; in both cases, the movement for change was led by the new middle classes, but they could not bring about lasting change on their own, and ultimately political reform depends on who they choose to form alliances with. In Europe at certain critical moments, the middle class aligned themselves with the working classes and the peasantry in the push towards universal suffrage. But so far in Egypt, many in the middle class seem to have found the prospect of rule by the Muslim Brotherhood so distasteful that they would rather align themselves with the military.

The fourth section reviews what Fukuyama calls ‘Political Decay’ – where institutions that were designed for a particular place and time fail to adapt to changing circumstances. This section focuses heavily on the US; Fukuyama argues that the checks and balances of the US constitution have effectively become a “formula for gridlock”. The courts have “usurped many of the proper functions of the executive” while Congress – and the interest groups which dominate it – provide the executive with highly complex and sometimes self-contradictory mandates. In this context the American scepticism of the effectiveness of government becomes a self-fulfilling prophecy.

Political Order and Political Decay includes quite a bit more theoretical discussion and rather less history than The Origins of Political Order. Whilst this makes the book drier, it is potentially more useful to those working on ‘governance’ reforms in developing countries. Fukuyama’s front and centre message is that an effective state has to be the first priority in any effort to improve governance, and that democratic checks and balances, while critical in the long term, can prevent states from building effective institutions in the short term. Fukuyama draws a distinction between states that are strong in terms of their ability to repress their opponents and those that are genuinely effective in terms of collecting taxes and running government affairs professionally. He puts a great deal of focus on a meritocratic civil service with an entrance examination, as well as quality higher education which he sees as the bedrock of an effective bureaucracy. This might lead some to think Fukuyama is recommending development agencies to go back to the civil service reform programmes of the 1990s and early 2000s, with their focus on organisational restructuring, improvement in HR systems and so on. But this is not what he is saying. Fukuyama is always clear that reforming the civil service is a fundamentally political process, and technocratic tinkering with systems will make next to no difference. The battle to introduce merit-based recruitment in the US civil service was a long struggle over 40 years between 1880 and 1920 and required a political coalition of business classes, professionals and urban reformers. Passing a law was only the first step, and especially in the US decades of follow up were required before most of the civil service was recruited on a merit basis. For development agencies, supporting such a process could lead to real change, but it takes a long time and it cannot happen without a strong domestic reform coalition.

The other thought I took away from the book is that perhaps the best strategy to improve governance is actually not to work in the ‘governance sector’ but to promote economic development. Reform coalitions can only be put together when there are groups in society which stand to gain from reform – and often these new groups are those which are the beneficiaries of recent economic growth. However, not all growth will generate such reform-minded groups. If the benefits of growth only go to a small number of people, these will likely be co-opted into existing elites. So any ‘growth to governance strategy’ will need to deliver the holy grail of ‘broad-based economic growth’… which may be almost as difficult to achieve as ‘good governance’! At any rate, this book would suggest that development agencies need to think clearly about the impacts economic development programmes can have on politics and governance. In the long run these may have more of an effect – for good or ill – than all our work with training parliamentarians or funding anti-corruption commissions.