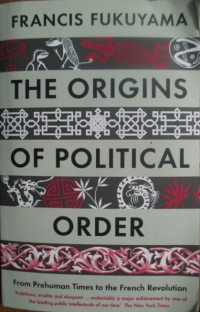 The Origins of Political Order, Volume 1 of Francis Fukuyama’s monumental two-volume history of the state, is a readable and compelling account of political development over the past few thousand years. Its ambition is prodigious, seeking to account for the development of the state “from Prehuman Times to the French Revolution”  – Volume 2, which I’ll review next, takes the story up to the present day. It’s full of interesting insights, from politics amongst chimps to the machinations of slave-bureaucrats in the Ottoman Empire. But has Fukuyama moved away from his earlier controversial view that in liberal democracy the world has reached ‘the end of history’?

The last big book on politics I read was Acemoglu and Robinson’s Why Nations Fail, back in 2012. That book had a wonderfully seductive style, a collection of fascinating anecdotes, and a powerful central argument. But it left me uneasy in many ways. Its unabashed trumpeting of the achievements of the UK and the US and throwaway dismissiveness about the rise of China and other fast growing authoritarian states seemed a bit detached from reality. It was highly selective in the history it chose to recount, skimming over much of Chinese, Indian, and Middle East history for example. And its central idea of ‘inclusive’ versus ‘extractive’ political institutions, whilst striking in its clarity, seemed ultimately too simplistic to be useful.

If you felt anything like the same way, you might enjoy The Origins of Political Order as something of a corrective. Fukuyama’s framework of political development is much more subtle than Acemoglu and Robinson’s. Rather than a simple division between inclusive and extractive institutions, Fukuyama considers three aspects of building an effective state: first, what he calls political order or state building (including especially military dominance over a piece of territory and the ability to raise taxes); second, the rule of law; and third, accountable government. Fukuyama’s book places a good deal of emphasis on ancient China as the first place in the world where a ‘modern’ state was built, complete with a meritocratic bureaucracy. For Fukuyama, China is a better paradigm for most of the rest of the world than Europe because ‘state building’ in terms of military organisation and tax raising powers tends to come naturally to many rulers. By contrast, the rule of law and accountability are much harder to put into effect, and European societies’ early development of these was unusual in historical terms.

The book starts with a fascinating section on politics in chimpanzee societies. Fukuyama argues that humans are by nature social beings, and since the earliest times likely lived in kin-based groups; that humans like chimpanzees tend to behave more altruistically towards kin than strangers; that we have a natural instinct for creating and following rules, but also a natural propensity for violence (male chimpanzees will attack and kill males from other kin groups, taking the females captive). These characteristics, in Fukuyama’s view, had a major influence on future forms of political organisation; for example, humans’ tendency to trust kin more than strangers is a biological explanation for patrimonialism. He then moves on to the next ‘stage’ in political development: tribal societies. Fukuyama believes that all human societies started off with some kind of tribal organisation – effectively he sees tribes as a way of aggregating up from small bands of kin to larger (but still kin based) social groups. Tribalism for Fukuyama is also a default system of social organisation, to which humans will return when state structures collapse.

The rest of the book is structured into three main sections, one for each of the three components of the ‘modern’ state. The section on state building focuses heavily on China, with other chapters on India and the Middle East (mainly the 13th – 16th century Mamluk sultanate and later the Ottoman Empire). These sections provide some interesting deep historical background to today’s developing countries.

For example, China’s perfection of a powerful and effective state extremely early on allowed that state to dominate its society, leaving little room for challenge or accountability, even for the aristocracy. By contrast, India’s caste system, with the Brahmins located above the rulers in the hierarchy, prevented the state from becoming as powerful as that in China and, Fukuyama argues, may have put India in a better position to adopt democracy later, irrespective of the role of the British. Finally, the sections on Mamluk Egypt where ‘the army was the state’ bear a distinct parallel with the Egypt of Nasser, Mubarak and el-Sisi.

The sections on rule of law and accountability then return to medieval and early modern Europe, but with a difference from many other accounts of political development. Whereas others have tended to see modern political institutions emerging together with the Reformation, Enlightenment and Industrial Revolution, Fukuyama separates the story of the rule of law from that of accountability. He finds the origins of the rule of law date back to struggles between the Pope and the Holy Roman Emperor in the 11th – 12th centuries. These struggles established the Pope’s authority as separate from that of the Emperor’s, and helped to strengthen the idea that there was a law above and beyond the Emperor’s will. He also argues that medieval European states (especially England) placed a big emphasis on dispensing justice in the medieval period, well before they developed modern state administration.

In the section on accountability, Fukuyama goes to great lengths to show how England’s development of a functioning Parliament was a historical exception, not mirrored even in other European countries. Ultimately, he argues, the best chance for accountability is where there is a good balance between a strong state and strong social forces to resist that state. A state which is too strong relative to society (as in China) is one problem, but if the state is not strong enough (as in medieval Hungary), that can be just as big a problem, as aristocrats abuse Parliaments and repress those below them in the social hierarchy.

The Origins of Political Order is a long read but a fascinating one. I particularly enjoyed the emphasis on the role of ideas, especially religion, throughout history. (Ideas are making something of a comeback these days, after years when many social scientists sought to explain almost everything in terms of class structure, economic forces or rational self-interest). My one main concern with the book, despite its nuance and sophistication, was the lingering suspicion that Fukuyama has still not let go of the idea of an end of history – not in the sense of the end of historical events, or the end of conflict in history, but the end of “history understood as a single, coherent, evolutionary process”. Fukuyama believes that there is a logical end point to political development and this can be found in the strong state, the rule of law and accountable government. Whatever you believe about the desirability of these three things, it is hard to accept a kind of messianic idea that all humanity is heading towards the same kind of political system. History, including the history Fukuyama recounts, tends to suggest otherwise.

One thought on “Francis Fukuyama, ‘The Origins of Political Order’”