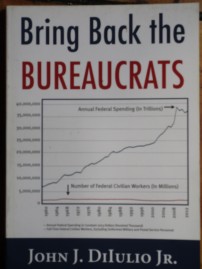 Bring Back the Bureaucrats is a small book (it’ll fit in a jacket pocket) with a big message. John DiIulio argues powerfully and persuasively that the main problem with US Government is not that it’s overbloated but that it’s understaffed. DiIulio takes aim at the false economy of preventing the federal government from hiring more bureaucrats, whilst it delivers its huge and increasingly complex programmes through a vast array of contractors, sub-contractors, and non-profit organisations, as well as state and local governments. It’s a thought provoking argument which has significant implications for the development business, as we too deliver more aid through a range of proxies from multilaterals to NGOs to private companies.

There has been a lot of talk in the UK media in recent years about “foreign aid fat cats”. From the Mail on Sunday to the Guardian, journalists have argued that increasing amounts of UK aid is captured by large consulting firms, and fails to reach the world’s poorest. Arguments about this get heated: on the one side journalists argue that six figure salaries for people supposedly helping the poor can’t be justified, whilst others including the Independent Commission on Aid Impact (ICAI) have argued that private sector contractors “have delivered positive results at competitive fee rates”.

John DiIulio’s book gives these arguments some helpful context. DiIulio is not concerned with the aid business specifically but the entirety of US Government. Also, he does not only review the role of private contractors, but that of much wider range of agents, including non-profit organisations and state and local governments. Dubbing the US Government ‘Leviathan by Proxy’, DiIulio shows how Government spending has increased over 5 times since 1960, from some $700 billion to over $3.5 trillion (adjusting for inflation) – whilst the number of federal civil servants has remained basically the same, hovering either side of 2 million. That number of civil servants may sound like a lot, but it is actually small in comparison to the sheer volume and complexity of US Government activity, DiIulio argues. More worryingly, this shortage of trained, professional civil servants has led to an explosion of government by proxy, as ever increasing amounts of Government funding are channelled through non-Government bodies. Civil Servants struggle to keep up with all the programmes they are legally bound to monitor.

DiIulio, unlike the aid journalists, is not mainly concerned about the salaries paid or the specific value for money provided by the agents he describes. He’s more concerned about the structural problems they create. Two points from his argument really struck me. The first is that, in DiIulio’s words, “the bureaucrats are not the proxies’ bosses”. Even though the proxies are accountable to civil servants for implementation of their specific grants or contracts, this is not the beginning and end of their accountability. In fact, private companies, non-profits and state governments all have head offices in Washington which seek to influence federal legislation and regulations in their own favour.

The second excellent point that DiIulio makes is that the sheer complexity of the “implementation chain” for many US Government programmes, with for-profit contractors, non-profit grantees, and subcontractors and subgrantees, makes it very difficult to track whether these programmes are effective. DiIulio cites the concerning example of toxic waste management, where a recent Government Accountability Office (GAO) report found that it was impossible to track the number of sites that were not being managed appropriately, due to the complexity of the system and poor data.

Turning from the US Government to the development business, the first point to note is that this is not only a DFID issue. The recent ICAI report into the UK’s use of private contractors includes a helpful table at the back, ranking donors according to the percentage of their aid which flows through ‘private entities’.[1] The UK is in the middle of the pack, providing about 9% of its aid through these entities, with Ireland, the Netherlands and the US all on over 20%. Having made this point, I do believe that some of the issues DiIulio raises apply to the development business too. For example, some on the right complain that NGOs receive aid funds and use these to lobby government – although this practice has been restricted in the UK recently. On the left, others complain of the sometimes blurred boundaries between aid agencies and those who promote private business from the donor country. I’ve met one or two individual diplomats (I’m not saying from which countries!) who are tasked with doing both things.

There is also little doubt that the development business also suffers from long and complex implementation chains. In some extreme cases, donors have contracts with private companies who have contracts with international NGOs, who have arrangements with national NGOs, regional ‘networks’ of NGOs and finally ‘grassroots’ or village-level organisations. Monitoring aid delivery in these kinds of cases is a very difficult and complex business, and the scope for donors misunderstanding what is actually happening ‘on the ground’ is high.

In this context, the aid business faces an additional problem that the US Government can largely get around. In democratic societies, if a Government service is poor, people will complain, and ultimately reserve the right to throw a Government out if it fails to deliver. This is a powerful way for Governments to find out where problems are happening, even in the face of complex implementation chains. In the development business, if a project fails, processes for this news to reach headquarters are largely only ‘on the inside’ – in other words, through the implementers of the project. The outside, ‘democratic’ route for finding out problems tends to be weak in development – with the exception of a few particularly egregious cases exposed by investigative journalists.

Many individuals who work for private contractors, NGOs, multilateral agencies, faith groups and others who implement development projects are highly capable and motivated people. Some of the most widely lauded programmes in DFID at the moment are implemented by private companies. But I do think many aid agencies face a structural problem in the number of layers there are between headquarters and final beneficiaries. In the 1950s and 60s, aid agencies would tend to build a road or a power station, or extend irrigation to a new area. Many of these projects failed, but at least the donor in question would know what had failed and why. Nowadays with increasingly complex and sophisticated programmes, it is sometimes difficult to be sure what effect a programme has really had. The definition of success and failure is therefore all the more open to ‘spin’ and interpretation.

‘Bringing back the bureaucrats’ and getting more development agency staff directly involved in delivering aid programmes might help quite a bit with these problems. But as DiIulio acknowledges, it’s highly doubtful whether his solution is politically feasible. In the development business, if we can’t have armies of bureaucrats out ‘in the field’ talking to poor people (much as I might like that), one potential part of the solution is to improve the way we monitor and evaluate programmes. Lots has been done to make evaluation more ‘scientific’ in recent years, especially with the push towards randomised controlled trials. But I would like to see development agencies develop a much better understanding of how poor people see their own lives changing, and also a better understanding of what the real life effects of our programmes really are – including their unintended consequences. If we don’t do that, there’s a high risk that our definitions of success and failure will be very different from those of the people we are trying to help.

[1] This is an OECD category which includes ODA channelled through NGOs as well as commercial companies (but excludes ‘core’ contributions to NGOs or other private bodies). If you’re bewildered, the OECD DAC statistical reporting directives give the full low down…