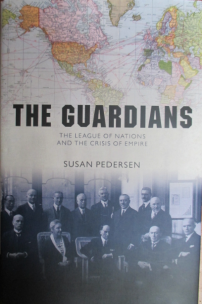 ns is a fascinating account of the League of Nations’ ‘mandate system’, put in place to oversee administration of former German and Ottoman colonies between the wars. It provides a great insight into the early history of ‘development’ efforts and how colonial powers tried to justify and explain them to an international public. Perhaps even more important, the book reminds us how fragile ‘internationalism’ is once great powers lose interest in it – a tough lesson for our own times.

‘Development’ has a long history, and it has not always been a happy one. I’m not just talking about the disappointment felt by those who have seen their countries stagnate while others took off, or taxpayers’ frustration at the ‘waste’ of aid money on failed projects. Development, in the sense of rich countries’ efforts to support economic growth or improved well-being in poorer parts of the world, has its origins in the colonial period. This is awkward for those of us who work in development agencies – we tend to see ourselves as standing in solidarity with developing countries in their struggles to break free from their often difficult pasts, and would rather not remember our own countries’ roles in shaping those pasts.* But an understanding of how history has shaped particular institutions, and the kinds of effects ‘development’ has had in history, is essential if we are to design more ‘politically smart’ and successful interventions in future.

The Guardians – the first history book I’ve reviewed here on Development Book Review – is a brilliant account of a period between the wars when ideas about development were being crystallized. It tells the story of the League of Nations’ ‘mandate system’, set up to administer Germany’s former colonies and parts of the Ottoman Empire which had been taken over during the First World War. US President Wilson’s wartime promises of ‘self-determination’ and similar commitments by UK Prime Minister Lloyd George had raised hopes of independence among some of the peoples involved, especially the Arabs. But in the end the occupying powers (Britain, France, Belgium, South Africa, Australia, New Zealand and Japan) were allowed to keep the territories they had taken over, subject to League oversight and scrutiny, through a body called the Permanent Mandates Commission (PMC). Pedersen’s book tells the story of the PMC, its members, their debates and their considerable influence on the course of imperial history, as well as the early history of ‘development’ efforts.

The book is a true work of global history, with discussions in Geneva interwoven with accounts of developments in the various mandated territories. There are chapters on the origins of the mandates system, which emphasise the critical role of the UK and the US. Essentially, the British saw it as in their interests to support the system as they believed that it would be a way of “universalizing British norms and practices” across the world, whilst the US was attracted to the British model of empire, especially the emphasis on free trade. There are then a series of chapters on the different mandated territories, focusing mainly on crises which were important enough to be discussed in Geneva. These include shocking incidents such as the bombing of the Bondelswarts people in South West Africa (modern day Namibia) for failing to pay their taxes; the use of forced labour by the Belgians in Rwanda-Burundi, supposedly as an anti-famine measure; the British decision to award independence to Iraq in 1932, whilst keeping control of defence and the oilfields; and the situation in Palestine, where Britain tried hopelessly to reconcile its contradictory wartime promises to the Jews and the Arabs, while a pro-Zionist PMC urged Britain to take a ‘firmer’ line. The book finishes with the crumbling of the international system as Europe went back to war.

Pedersen’s main argument is that whilst the mandates system had little impact on the way that the territories concerned were actually run, it did have a significant effect on empire as a whole because it put imperial administration much more into the (Western newspaper-reading) public eye. The system allowed people inside and outside the mandated territories to petition the league, so territorial carve-ups and casual killings could not be kept quiet as they might once have been. The degree of scrutiny was so irritating to the mandatory powers that some, like the British in Iraq and later the French in Syria, thought that it would be easier to negotiate independence with the territories in question – but a very restricted kind of independence with the former mandatory power in prime position of influence. So, Pedersen argues, the mandates system (against its own intentions) played a role in making the end of empire imaginable, and helped to establish today’s system of notionally independent states with severe restrictions on their economic and military sovereignty.

The mandates system also had a significant impact on early thinking about ‘development’. One of the PMC’s most influential members was Lord Lugard, the celebrated British colonial administrator and author of The Dual Mandate in British Tropical Africa (1922).

Lugard believed that colonial powers had a duty to develop the natural resources of territories they controlled, but that this should be balanced with a duty to preserve the well-being and happiness of the ‘native’ population. This meant, for him, that those populations should be protected against the dangerous influences of materialism and rapid economic change. He was concerned about the danger posed by urbanized, educated, ‘detribalised’ Africans, saw racial mixing as anathema, and was a strong supporter of ‘indirect rule’, i.e. governing through ‘traditional’ chiefs at a local level. Lugard’s vision was hugely influential on the PMC and came to dominate international debates on development during these years. All members seemed to show suspicion of educated or mixed race figures who claimed to speak on behalf of ‘native’ populations. Even Anna Bugge-Wicksell, the veteran women’s suffrage and peace campaigner and the only woman on the committee, urged mandatory powers to ensure that their education policies concentrated on “the formation of character and habits of discipline” and the teaching of agriculture and animal husbandry rather than European style “book-learning”. Whilst much of this way of thinking has rightly been consigned to history, some lingering echoes of these ideas remain today, especially Western visions of an idealized African ‘village life’ which should not be disturbed – and the long term prioritization of rural development as a way of preventing migration to the cities.

Finally, The Guardians is a timely review of the strengths and weaknesses of ‘internationalisation’ at a time when it seems to be in retreat globally. Pedersen describes the benefits of internationalization in similar terms to Amartya Sen when he talks about ‘government by discussion’ (see my review of his The Country of First Boys). She says that the great powers in 1919 “decided to manage the geopolitical order not through the balance of power or an armed stand-off” but through the League of Nations, “so that conflicts could be dealt with through deliberations […] visible to informed publics around the world.” Of course this experiment failed in large measure, and Pedersen also shows how fragile internationalism was – as soon as a few great powers decided it was not in their interests to work through the League of Nations, it lost authority and ultimately crumbled. With this in mind, it’s concerning to see so many anti-internationalist trends in the world today, whether the recurrent crises of the EU, the rise of Donald Trump, or Vladimir Putin’s frequent references to the ‘balance of power’. It’s often tempting to trash international institutions as a waste of time and money, and I have sometimes felt that kind of frustration with them in my own working life. But the aspiration to resolve conflicts and difficult issues through open debate rather than secret deals or outright war is surely an ideal worth standing up for.

Susan Pedersen, The Guardians: The League of Nations and the Crisis of Empire, Oxford: OUP, 2015

* Of course, many people who work in development agencies do not come from countries which formerly had colonies. But even for those people, there are awkward questions about assumptions and concepts in development which have colonial origins.