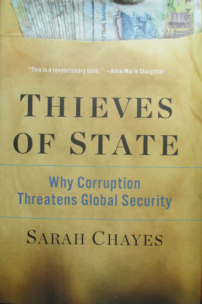 Anti-corruption used to be something of a policy backwater for development agencies. When I started working at DFID’s London office in 2003 I sat next to the anti-corruption team. They were an enthusiastic lot, but there were only 3½ of them, and they were working against the spirit of the times in many ways, with increasing amounts of UK aid going directly to developing country governments in the form of budget support. Nowadays, anti-corruption is flavour of the month in UK development circles. The Prime Minister is putting a lot of emphasis on it, and will hold an anti-corruption summit in May this year. There is a cross-Government anti-corruption action plan. There have been two reports on the issue from the UK aid watchdog – the Independent Commission on Aid Impact – and Parliament’s International Development Committee is now getting in on the action. The issue also seems to be getting more attention globally, with the new UN Sustainable Development Goals putting much more emphasis on corruption than the previous Millennium Development Goals. In the midst of all this, I played my own personal role in the anti-corruption ‘surge’, becoming the first (I think) dedicated anti-corruption adviser for a DFID country office, in Tanzania from 2012-2015.

Sarah Chayes’ Thieves of State has therefore come out at a good time. In fact given the current spotlight on anti-corruption, you might think that her accusation that corruption is underemphasised or overlooked is rather out of date. But as a chronicle of an attempt to tackle corruption that failed, it contains valuable lessons as international development agencies try to get to grips with this difficult agenda.

Thieves of State is a mix of Chayes’ personal experience trying to fight corruption in Afghanistan, working with the US military, and some more analytical and historical sections which cover Egypt, Tunisia, Uzbekistan and Nigeria in the present and the UK, the Netherlands and US (amongst others) in the past. Chayes’ central idea is that corruption is not just an annoyance to citizens in developing countries, or a waste of aid money, but a deep threat to global security. She argues forcefully that Afghan citizens’ frustration with Government corruption is driving them into the arms of the Taliban. For Chayes, corruption in Afghanistan is not just a ‘cultural’ thing, linked to traditional gift giving for example, but is a highly organised criminal business. Even the lowest level bribes extorted from ordinary citizens are linked in to a national system where money is passed from low levels of Government up to the top (not distributed down the chain in the form of patronage, as is sometimes argued). In the face of such organised and systematic corruption, Chayes argues, citizens give up on their governments and are more likely to turn to extremist religious groups – who, even if they are violent, seem to offer the prospect of more moral, honest and effective government.

The chapters about Afghanistan were riveting and, for me, the most valuable part of the book. Chayes’ deep experience in the country, including a good amount of time living with ordinary Afghans, outside the international ‘bubble’ of green zones and military bases, clearly gave her some valuable insights into how corruption works in Afghanistan and how many Afghans perceive their Government. The contrast between the conversations she had with Afghans and the military strategising on PowerPoint was fascinating, showing just how out of touch expatriates can be with what citizens really think (and not just in Afghanistan). More disturbing was the way she described the international coalition as inextricably bound to the Afghan Government, unwilling to challenge its actions as they would be likely to damage diplomatic relations. This, Chayes argues, made Afghan citizens see the US and other countries as effectively complicit in the corruption and looting.

Looking beyond Afghanistan, the book’s argument is more problematic. While citizens across the world suffer under corrupt regimes, not all turn to religious extremism as a solution. It might have been interesting to look at the reasons why some people turn to extremism while others (for example in some African countries) seem more tolerant. More generally, Thieves of State is out of line with an important strand of recent scholarship from writers such as Mushtaq Khan and David Booth, which stresses that not all corruption is equally damaging. Khan, for example, distinguishes between the kind of predatory corruption in Afghanistan, and other messy but less damaging kinds of corruption, such as the way that individual capitalists in countries like Thailand or Bangladesh may be supported by the state. A crude way of explaining the difference is that in the less damaging forms of corruption, a bridge may be built at above market prices and someone makes a 10% cut – but the infrastructure is still built and can help economic development. In more predatory corruption, the bridge may never be built at all. Chayes is dismissive of those who make a distinction between petty and grand corruption – in Afghanistan both are part of the same system and small scale bribe money is passed up to the top. But in her hurry to eliminate this distinction, she tends to miss out on others which may be more significant.

The historical sections of Thieves of State were interesting but left me wanting more. Chayes spends a lot of time reviewing ‘mirrors for princes’, advice for rulers written between the 9th and 16th centuries, both in Europe and the Islamic world. Many of these pieces urge rulers not to be corrupt and warn of the threat corruption poses to the realm. A more interesting reference point for me would have been Ibn Khaldun, the 14th century travelling bureaucrat and historian of Muslim Spain and North Africa. In his Muqaddimah, the prologue to his history of the Arab peoples, Ibn Khaldun puts forward a theory of the rise and decline of civilisations. He argues that ruling dynasties contain within themselves the seeds of their own destruction, as vigorous and energetic rulers succumb over generations to corruption and luxurious living, lose touch with their own people, and are eventually overthrown by a new more dynamic ruling family, only for the pattern to repeat itself. Much Arab and Islamic history has followed this pattern – as detailed by Albert Hourani in his brilliant History of the Arab Peoples – and religious fundamentalists such as the Wahhabists have also played their part in overthrowing tired dynasties over the centuries. Interestingly, though, Ibn Khaldun does not only emphasise corruption in a strict legal sense. He talks of broader injustice that develops in a society where the rulers lose touch with the ruled, and the inevitability of collapse of a society where injustice reaches unbearable levels. This for me is an interesting comparison not just for Afghanistan and Nigeria but for the world as a whole. Whatever the effectiveness of formal justice systems in rich countries, there is something deeply unjust in the obscene levels of inequality in the world today, and I can’t help wondering how long this degree of inequality can be tolerated.

Despite these issues, Thieves of State is very welcome as an account of how damaging corruption can be in certain contexts, and as an illustration of the difficulties facing any external actor who tries to tackle it. Through the example of the US in Afghanistan, the book shows how even when foreign governments set out to address corruption in a serious way, their efforts may be trumped by other priorities – such as the need to maintain good diplomatic relations, to gather intelligence or to promote their country’s business interests. In all the fanfare on anti-corruption in the UK recently, I am glad that a part of the picture is about investigations of UK companies’ and individuals’ involvement in corruption overseas, through the National Crime Agency’s International Corruption Unit. Because, as Thieves of State shows, tackling corruption in other countries is a very tricky business – and perhaps Western countries would do well to focus first on rooting it out at home.